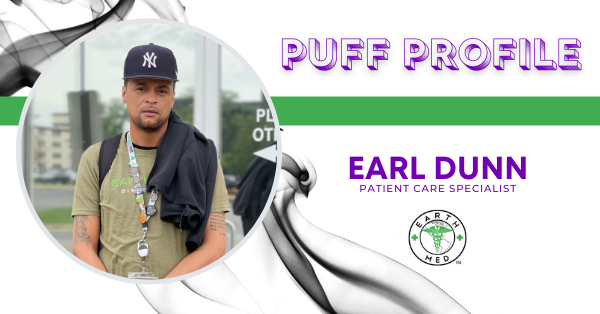 Part of what sets EarthMed apart from other Illinois marijuana dispensaries is its patient-first approach to care. A considerable part of this difference is the compassionate and empathetic patient care specialists found at Addison and Rosemont dispensary locations.

Over the next few months, our blog posts will occasionally feature one of these outstanding budtenders in our new Puff Profile. We hope you can use these pieces to learn a little more about your favorite EarthMed employees and maybe even ask for them by name the next time you visit one of our two Chicagoland marijuana dispensary locations.

Our first featured EarthMed VIP is Earl Dunn. Earl has worked at the Rosemont dispensary since December 2020 and was previously a chef before starting in the cannabis industry. I enjoyed my conversation with Earl and getting to know him a bit. He taught me quite a bit about the industry that I had absolutely no idea existed. Did you know that there are college courses you can take to get certified in cannabis? I didn’t, but Earl did it.

One day he was working at his chef job and saw an article in the newspaper for a local community college offering cannabis certification courses. Earl decided to take a leap of faith and signed up. He was actually in the first group of students to complete their certifications at Oakton Community College. He received certificates in Cannabis Cultivation, Cannabis Dispensary and Patient Care, and Cannabis Transportation, Logistics, and Supply Chain Management. Earl applied at EarthMed the same time he started taking his certification courses, and it took him a year to get hired. Having his certifications in place definitely helped with the hiring process.

EarthMed employees are some of the best and brightest in the industry, and Earl is no exception. Before his career as a chef, Earl studied Music Business Management at Columbia College. His love for music spans many genres and decades. He is an eclectic fan of music -- he can find something beautiful in each piece of music he listens to. And when he is not working, Earl likes to spend time with his 15 and 11-year old children - one boy and one girl -  introducing them to music and watching them grow up.

While Earl was young, he was taught to help as many people as possible, making EarthMed and the cannabis industry the perfect career choice. His favorite thing about working at a marijuana dispensary is the ability to help his customers. Many regulars come in and ask for him specifically because they know that Earl knows his cannabis.

Although Earl is not a medical patient, he told me that cannabis is his “best friend.” When it comes to cannabis consumption, Earl prefers to smoke flower over shake. “Shake is easy to use when you are stuffing a cone or rolling a joint, but there is something magical about breaking down a flower bud. Seeing the hairs and crystals - there’s nothing like it,” Earl said.

Indica: Mac (Grassroots) - This strain is super heavy and works better with Earl’s receptors than other indicas. It gives him the full-body, heavy feeling that he looks for in an indica.

Stop by the EarthMed Rosemont location to meet our Patient Care Specialist Earl Dunn; you won’t be disappointed! In the meantime, you can follow Earl on Instagram or Facebook.