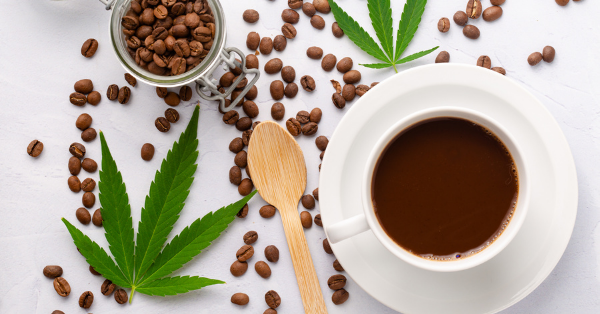 For me, work mornings are for coffee, and my day off mornings are for weed. It appears, however, that I may be in the minority among regular recreational and medical marijuana smokers. After all, there must be a reason why decriminalized cannabis pre-rolls first appeared in Amsterdam’s coffee shops, right?

Like most people, the pandemic freed up time to consume digital content while being stuck at home. Not a fan of the politics and general bad vibes of Facebook, I downloaded TikTok and fell in love with the platform. There are entire communities dedicated to what interests you. You have cannamoms, hippies, cosplayers, gardeners, DIYers, and everyone in between. Whatever you are into, there is a side of TikTok for you.

During my time browsing TikTok, I noticed a plethora of posts talking about “if your home smells like weed and coffee, we should be friends.” This got me thinking about how I very rarely mix coffee and cannabis. It made me wonder how the two substances interact with each other and what type of effect they can have on your body if ingested at the same time. Interested? Read on.

Cannabis and coffee are two-thirds of what is unofficially known as a “hippie speedball” in human performance training circles. The other third: exercise. According to research, the combination of marijuana, caffeine, and physical exertion release dopamine, anandamide, serotonin, and endorphins. Coincidentally, or not, these are the exact same neurotransmitters that are released when the human mind is in its peak state of performance -- also known as being in “flow.”

The flow state of mind has been described in many ways. Athletes might refer to their flow state as being in “the zone” or being “on fire” while musicians might explain their feelings with talk of “the pocket.” Everyone who creates or competes knows the feeling of their mental flow state -- it’s that space in time where time is an illusion, ego is unimportant, and you just do what needs to be done with no universal resistance.

The fact that the flow state can be accessed by combining coffee, cannabis, and exercise shocked this stoner. Had I been doing my mornings all wrong over the many years of being a cannabis enthusiast? Should I have been starting each morning with a cuppa joe, a joint, and a jog? I decided to give it a try last Saturday to see if I felt any different.

My morning started around 8 a.m. with a large coffee from Dunkin Donuts and four one-hitters of Jack Herer, a sativa-dominant hybrid strain. In order to conserve, one-hitter bats are my go-to smoking device. Since I am not one for jogging or sweating (if we are being honest), I decided to swim laps in the pool as the exercise portion of the experiment.

After 20 minutes of swimming freestyle laps and pretending I was a mermaid, I took a break to catch my breath and immediately thought of how I was going to organize my thoughts for this post. My body felt good, my thoughts were free-flowing, and my mood was excellent. I thought to myself “Did I just unlock the secret to a happy life?” My elevated vibes continued throughout the day, but I got very sleepy in the afternoon and tried to take a nap but felt oddly wired and tired at the same time. All in all, I would call this experiment a success.

That being said, the more I dug into this topic, the more information I encountered that said that combining weed and java can have a negative impact on memory. Being a seasoned stoner with Alzheimer’s in her family history, short-term memory loss is one of the side effects of marijuana that displeases me the most. If there is a correlation between coffee, weed, and memory issues, I am happy to consume them separately.

Even though I learned that studies have also shown that low levels of caffeine can actually amplify the effects of THC, for me -- the memory issue is a deal-breaker. Both substances assist my daily activities in different ways, but the wired and tired feeling was not great. Perhaps trading the sativa-dominant strain I smoked for a heavier, indica would alleviate that discomfort. And maybe I will try that, but for now, I will continue consuming medical marijuana on my weekend mornings and after work and coffee on weekday mornings when I need to be sharp for work.

Are you a fan of the hippie speedball? I would love to hear your thoughts -- find me on Twitter, TikTok, or Instagram and let me know.