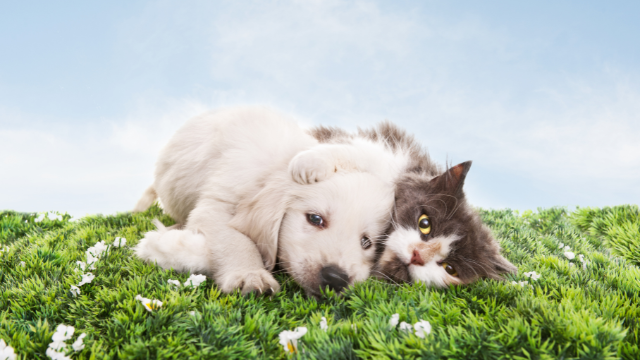 There’s hardly any doubt about the negative effects of secondhand smoke. Except for 12 states, most everywhere has enacted a law or ban on smoking in public places, especially when indoors. When it comes to smoking, we take our own health, or at least the health of others, very seriously. And this is all before even considering cannabis.

But at home, you’re free to do as you please and even hot box your house without a care in the world, that is, until your pet walks in. Now you’ve got to ask yourself, “Is weed smoke bad for cats?” or “can your dog get high off secondhand smoke?”

And you should be asking yourself these questions! As it turns out, cannabis smoke can affect our furry four-legged pals more than we might think, and that goes for all kinds of pets too. Cannabis second-hand smoke and pets don’t really mix, and it can have harmful effects on respiration, especially for birds. Here’s what to know about how weed affects cats & dogs and why it’s bad to smoke around pets.

How Does Cannabis Affect Cats, Dogs & Other Animals?

To better understand why smoking weed around pets is bad, let’s examine the effects of cannabis on animals. Tetrahydrocannabinol (THC) is the compound found in cannabis responsible for its intense psychoactive effects and the reason you feel high when it’s consumed. There are two receptors found in humans and pets, CB1 & CB2, that process these effects and correspond to the central nervous system and peripheral tissues, respectively.

Compared to humans, animals have more of these receptors available. For example, dogs have a higher number of CB1 endocannabinoid receptors than humans do, making them more susceptible to the effects of cannabis and at greater risk of intoxication from the same dosage. Increased dosage and THC concentration, like the kind found in medical-grade marijuana, can be potentially fatal to dogs and other animals.

These worst-case scenarios of cannabis intoxication mostly apply when pets eat and ingest cannabis edibles, concentrates, or flower. This doesn’t mean that smoking around your pets is safe or okay. Actually, smoking weed around your pets can lead to a different host of problems.

Is Smoking Weed Around Pets Bad?

If you were to ask any veterinarian if it’s bad to smoke weed around pets, they would likely advise against smoking anything around your pets, including cannabis. Weed smoke is bad for pets and, on a high level, can cause irritation to the lungs and respiratory system and affect the eyes and gastrointestinal tract. In more serious cases, weed smoke can contribute to respiratory conditions and issues like asthma.

Can Dogs Get High From Smelling Weed Smoke?

Yes, dogs can get high from inhaling secondhand marijuana smoke, but it would likely take copious amounts of weed smoke in a small space for a dog to become intoxicated. And that statement is meant to be taken with a grain of salt, as much like humans, different amounts of THC can affect each dog differently, so there’s no minimal or safe amount.

It’s also worth considering that, unlike humans, dogs have no intention of getting high and don’t know what’s happening when they do. They may feel scared or confused, especially if it’s affecting their mobility or perception, and it can be a frightening experience.

Is Weed Smoke Bad for Dogs?

Cannabis has been classified as a Schedule 1 controlled substance since 1971, which has made further research on marijuana, whether for medical reasons or otherwise, challenging. Because of this, you may be surprised to find that when it comes to marijuana, the secondhand smoke effects on pets, particularly dogs, have been studied as early as 1976. One study found that over time, dogs who inhaled weed smoke from a certain amount of cannabis daily, developed serious respiratory issues like bronchitis, pulmonary emphysema, and even lung cancer.

Suffice to say that as much as humans might enjoy the effects of THC, it’s probably a bad idea to blow smoke into your dog’s face or nose. You should avoid smoking around dogs as it can lead to symptoms like drooling, vomiting, shaking, and seizures for them.

Yes, weed smoke can have some unwanted effects on a cat’s health and behavior. It’s difficult to determine the amount of weed smoke required to affect or intoxicate a cat, as much as with people, and it depends on many factors such as weight, age, size, and more.

A case study found that a cat with marijuana intoxication displayed aggressive behavior and strong psychomotor agitation. It was also reported that the cat would develop alternating states of agitation and apathy, each lasting several minutes.

Is Smoking Weed Around Cats Bad?

It’s best to avoid smoking around cats. According to the American Society for the Prevention of Cruelty to Animals (ASPCA), cannabis is toxic for cats (and other pets), and it is not safe for them to consume in any form, nor do they enjoy it.

Remember, you can make the health-conscious decision to consume THC and experience its effects; your cat cannot.  Smoking weed around cats can put them at risk of symptoms such as:

You’ve heard of secondhand weed smoke now, but what is thirdhand smoke? First, let’s recall that pets’ noses and senses are more sensitive than ours. When we smoke cannabis, much like with cigarettes, the smoke leaves small traces and residue wherever it settles.

Thirdhand smoke happens when pets come into contact with that residue. The effects can range with each pet depending on their sensitivity, but it’s something to be aware of and avoid as much as possible.

There’s not really a pet-friendly weed, and now we know how much our fur family can be affected by secondhand weed smoke. There are many things you can do to help avoid a marijuana intoxication accident with your pets.

Try to smoke cannabis outside, but if you’re smoking indoors, choose a room with good ventilation, and don’t let your pet in the room while smoking. Avoid feeding any THC products to your pets unless it’s recommended or instructed by your veterinarian. Keep all your flower and cannabis products, especially edibles, locked up and out of reach of your pets.

We have the understanding to make these choices for ourselves, but our pets are counting on us to take care of them, so be cool, and stay safe!