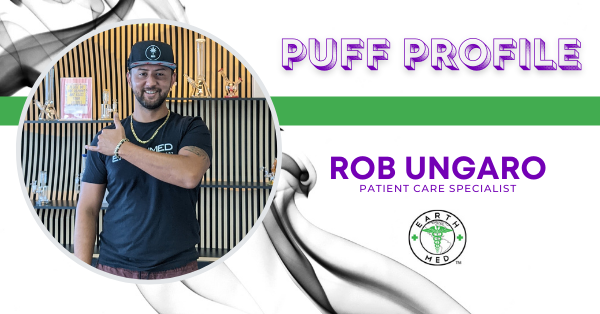 I hope you enjoyed reading last month’s feature on EarthMed’s Patient Care Specialist, Earl Dunn. This month, we feature the very knowledgeable budtender Rob Ungaro who has been with EarthMed for three years.

The cannabis industry started calling Rob seven years ago when he was living and working in Southern California. Since marijuana has been legal in California since 1996, Rob’s industry knowledge and wisdom he brings to EarthMed are truly invaluable.

Rob has experience working for cannabis non-profits and dispensaries but is most proud of his involvement in working with Weed for Warriors (WFW) in SoCal. WFW is a social justice non-profit organization that helps United States veterans obtain marijuana for their physical and mental well-being. WFW believes that providing ex-servicemen and women with the life-saving cannabis plant can help decrease the suicide rate amongst veterans, and Rob is happy to volunteer his time whenever he can to this cause that is dear to his heart.

The relationship that Rob has with cannabis is one of a medical marijuana patient and his best friend. “We do everything together. From doing laundry to going to the gym,” said Rob.  When he is not being a social justice warrior or assisting recreational customers at EarthMed’s Rosemont marijuana dispensary, Rob can be found at home in his castle with his queen and five-year-old princess.

When Rob talks about the cannabis industry, you can hear a fondness in his voice and tell that he genuinely cares about the people he helps with marijuana. I asked Rob his favorite thing about working in the cannabis industry. He told me an incredible story of watching a cancer patient go from Stage 3 to complete remission within one year of cannabis use.

The patient had developed visually disturbing skin cancer all over their face, upper back, and arms. On Rob’s suggestion, the patient began using Rick Simpson Oil (RSO) directly onto the cancerous spots and covered them with bandages. Within a few months, the spots shrunk until they ultimately disappeared. Rob told me that RSO could also be placed on the belly button to help with menstrual cramps, stomach pains, gastrointestinal issues, and gut inflammation. “CBD works too, but not as well. And you need to remember to use CBD regularly to get the effects. You aren’t going to see results after just a handful of times using CBD; it takes a week or two,” Rob reminded me.

Some incredible stories get collected when working in the cannabis industry and one of Rob’s craziest twelve hours was when EarthMed first went recreational on Jan. 1, 2020. “Everyone was working; even the dispensary owners were on the floor. We all worked a full 12-hour day,” Rob said. There was a line that wrapped around the building that was incredible -- not only because of the length of the line but also because of the blistering cold. Recreational customers stood in 30-degree weather for hours with smiles on their faces waiting to buy their first legal amount of weed. Rob was happy to say that EarthMed served every person that waited in line. If that isn’t a commitment to customer satisfaction, I’m not sure what is.

Indica: Blueberry Clementine (Revolution) - this strain has a wonderful taste, and it is the only variety that makes Rob feel like he’s biting into a blueberry and an orange at the same time.

Sativa: Jack Herer (GTI) is a motivating and uplifting variety that gets Rob off of his butt to go to the gym or do the chores he has been procrastinating.

Hybrid: McLovin (Ascend) - Rob enjoys this variety’s happy effects and gentle body euphoria. It’s terrific for any time of day, and he can always expect a smile on his face after consuming it.

The next time you are in the Rosemont area, swing by EarthMed and say hello to our October Featured Patient Care Specialist Rob Ungaro. You can also follow him on Instagram.