What is a Gravity Bong? 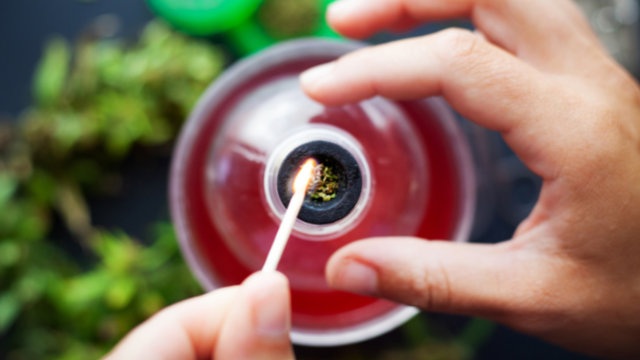 What is a Gravity Bong?

A gravity bong sounds like a high-tech scientific invention for smoking cannabis, but that's not the feeling you get when looking at one of these barebones, DIY bongs. A gravity bong, also known as a GB, Geeb, bucket bong, or sometimes waterfall bong, is a type of homemade bong that uses water and pressure to push smoke into the lungs. As the cannabis is lit, gravity pulls cannabis smoke into a bottle using water in a container to create suction.

Though the origins and inventor of gravity bongs are not known, they are well known and popular today. Gravity bongs can be made from various everyday household items and are known for delivering powerful hits.

Do Gravity Bongs Get You Higher?

Yes, and they're famous for it. When it comes to a gravity bong vs. regular bong, gravity bongs are usually made with larger containers (compared to traditional bongs and pipes) like 2-liter bottles. This means they can hold way more smoke.

Not only do they produce larger, more concentrated hits of cannabis, but the force created by the water vacuum also affects how quickly and intensely the smoke enters and fills the lungs. Almost anyone who has used a gravity bong will tell you that they are not for the faint of heart and best left to more experienced and seasoned cannabis consumers.

How to Use a Gravity Bong

The bottle should not be completely pulled out of the water as this will destroy the vacuum, and the smoke will be lost. Instead, the bottle is pulled until only a small portion is still under water. Then, while ensuring the bottle is still in the water, the bottle and bowl are gently removed so the user can take the hit. As the user draws the smoke from the bottle’s mouthpiece, the vacuum pushes the smoke into the user's lungs and pulls the bottle back into the water. Be careful not to pull the hit too hard and fast so that you don’t end up with a big gulp of water!

Interestingly, they’re called gravity bongs when gravity doesn't play a significant role in how they function. You can definitely feel a downward pull as you pull the bottle from the water and as the bottle is pulled back down when you take the hit. Maybe that’s where the name and gravity-like feeling comes from.

Are Gravity Bongs Bad for You?

While we won’t touch on the effects of smoke on a person's lungs, it's worth mentioning that homemade gravity bongs are usually made of common and cheap items, usually 2-liter soda bottles. Most of these single-use plastic bottles are made with PET and polyethylene terephthalate, which is known to release certain chemicals when exposed to heat.

Though it's not entirely known how this may affect your health, it's something to consider when using gravity bongs. Smoking devices made from glass and silicone do not carry this risk and are better to use whenever possible.

Even though they are called gravity bongs, they don't operate as traditional bongs do. Although both produce very concentrated hits of smoke, only the regular bong forces the smoke to pass through the water, which can help filter the smoke and cool it down.

On the other hand, gravity bongs use water to create a suction force where the smoke doesn't pass through the water at all.

How to Make a Gravity Bong

Now onto the main event: making a gravity bong. As complicated as they might sound and look.

First things first! You'll need to gather some items to start, but you'll likely already have most things at home. This guide will outline how to make a gravity bong the traditional way with a 2-liter bottle and bucket, usually of the 5-gallon variety.

Another item on the list is usually a socket, like the kind used for a socket wrench or aluminum foil, as these will serve as the bowl that holds the cannabis. You can also use aluminum foil if you don't have a socket lying around. This guide will have instructions for both, so feel free to use whatever is best for you.

Once you've gathered all the materials for your gravity bong kit, you're ready to start.

Cut off the bottom portion of the 2-liter bottle with your knife or box cutter, but not too much—usually just the base of the bottle. The bigger you leave the bottle, the more smoke it will be able to hold.

If at all possible, use a socket to keep things simple. Use your knife and poker to cut a hole in the top of the bottle cap just big enough for the narrow end of the socket to fit. The socket should fit as snug and tight as possible so that any air is drawn through it and not around it.

If you're using aluminum foil, cover the top of the cap with the foil, then, using the poker, poke a few holes through the foil and cap, which will allow air into the bottle. Be sure to reshape the foil into a bowl as much as possible to help keep the cannabis centered and secure. Remember that the cap will need to be screwed off for this to work.

You can also use a bowl from a traditional bong or smoking piece if you have one available.

Step 3: Light Up and Fill the Bottle

With the bowl filled, submerge the bottle in the water to just under where the cap is. Then use the lighter to hold a flame above the cannabis in the bowl and slowly pull the bottle up. You will feel the pull created by the water vacuum and see the 2-liter bottle filled with very concentrated smoke. Keep pulling up and lighting until the cannabis is consumed or the bottle is almost out of the water. If you did it right, this usually happens at the same time.

You’re almost ready to take a hit! The only thing left to do is to twist the cap off the bottle carefully. Careful not to pull the bottle out of the water or push the bottle into the water at this step, or you'll lose the smoke. Put your mouth to the mouthpiece, and draw the smoke into your lungs. You’ll feel the bottle naturally pulled into the water as you breathe in smoke. Let this happen, and move your head down with the bottle as you inhale, stopping just as the water is about to get to the top of the bottle to avoid getting water in your mouth.

The smoke will be highly concentrated, so don't feel the need to hold your breath. It’s sure to be a potent hit that can make even the most experienced smokers cough like it's their first time! If you are concerned about the smell of smoke, read our previous blog, 27 Ways to Mask that Weed Smell When You Smoke Marijuana, for some helpful tips.

So as you can see, gravity bongs are simple smoking devices that can be made from ordinary things, and it likely took a stoner brain to come up with the idea. But don't let the simplicity fool you. Gravity bongs produce very thick and concentrated hits that can defeat even the strongest of smokers. They deserve your respect, maybe even your admiration, and are likely here to stay, as they’re proof in the cannabis world that where there’s a will, there’s a way.