9 of the Best Low Odor Strains for Toking 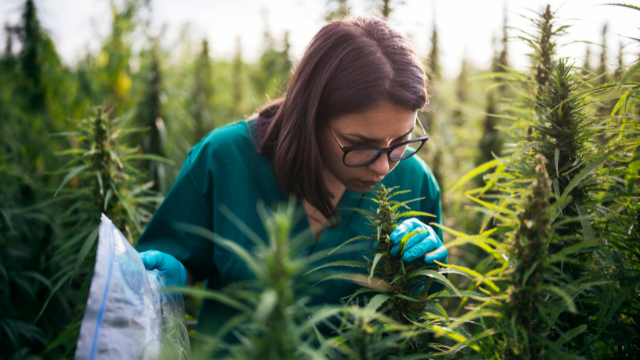 Sometimes, even the most avid stoners seek strains of weed with no smell or strains that have minimal odor. While dank weed is typically the most sought-after flower with loud terpenes that produce pungent aromas, cannabis connoisseurs may want to enjoy a low odor strain every now and then.

Whether you want to smoke no smell weed discreetly, find the best low-odor strains for indoor growing, or enjoy a low-odor cannabis strain with slightly sweet aromas compared to the typical skunk smell, you can find them at your local dispensary. We’ve compiled a list of the nine best low-odor strains of marijuana in no particular order.

1. Blue Mystic: The first almost odorless weed strain that makes our list is Blue Mystic. This indica-dominant hybrid strain is a cross between Blueberry, Northern Lights, and Skunk. Since this low odor indica strain has a flowering period of seven weeks, many indoor growers are inclined to grow Blue Mystic. Instead of producing a pungent odor similar to skunk, Blue Mystic gives off a subtle aroma of sweet-smelling fruit, specifically blueberries.

With a THC concentration of 15%, this low-odor cannabis strain produces a relaxing and euphoric high and can be used to manage chronic pain, bouts of nausea, sleep deprivation, and stress. You’ll notice this sweet-smelling strain by its appearance, as the flower has a slightly blue tint to it, and the plant is covered with many white trichomes.

2. Durban Poison: A popular strain among the cannabis community, Durban Poison is one of the best strains that have no smell available. Many growers enjoy the benefits of this odorless weed strain, so they can discreetly grow the flower indoors. The flowering period (when the weed has no smell) is typically about eight to nine weeks. After Durban Poison is cured, the aroma includes citrus and spicy scents, almost like licorice.

Durban Poison is a low-odor sativa strain that originates from South Africa. Stoners enjoy toking this cannabis strain with an average of 19% THC to feel energized and boost their mood. Many people experience an improvement in fatigue, focus, and mood. The Durban Poison strain can be distinguished from others by its long dark green buds covered in orange hairs and many trichomes.

3. Jack Herer: This sativa-dominant hybrid is one of the most popular low-odor autoflower strains on the market. With a timeframe of nine weeks to flower, growers can grow this low-odor cannabis strain indoors with no potent smells. Jack Herer does not produce the typical skunky weed smell. Instead, this low odor sativa strain gives off a sweet, fruity, and earthy aroma. The Jack Herer strain is a cross of Skunk #1, Haze, and Northern Lights #5. With 18% THC, Jack Herer is an excellent medical marijuana strain that helps patients treat their symptoms while improving their mood.

4. Master Kush: A low odor indica-dominant strain, Master Kush has a sweet taste with very minimal odors that are citrusy and earthy. This low-odor weed strain is ideal for those dealing with stress because it can uplift the consumer's mood. Made from combining Skunk #1 with Hindu Kush, Master Kush has an average THC content of 17%. You can distinguish the Master Kush weed strain from others by its distinct green leaves, frosted white trichomes, and bright orange pistils. Originating from the Netherlands, this earthy low-odor cannabis strain is a must-have for every stoner.

5. Northern Lights: Every stoner knows this is one of the best low-odor cannabis strains available. While Northern Lights was bred to be grown indoors, cannabis growers favor this low odor strain which produces flowers quickly. After the flower is cured, the buds of the Northern Lights strain smell subtly of pine and citrus. The high THC content (averaging about 18%) of this low odor strain gives users a decent body high with both relaxation and pain relief benefits. This low odor indica strain is used to help alleviate symptoms of insomnia, pain, and anxiety.

6. Papaya: An indica-dominant hybrid, Papaya makes our list because even though it has a sweet smell reminiscent of Papayas, this low odor strain doesn’t smell anything like typical dank weed. Papaya has a pleasant fruity aroma that then produces a spicy and peppery smell. This low odor weed strain has an average THC makeup of 17%, which helps give it some fantastic pain relief properties. Many medical patients use this marijuana strain to help with their muscle cramps, depression, insomnia, and anxiety. Those growers who prefer to grow flower indoors favor Papaya for its shorter flowering times ranging from seven to nine weeks. You can notice the Papaya strain from its sweet scent and the dense buds that are bright green with orange hairs.

7. Polar Express: Another low odor autoflower strain, Polar Express is a favorite for indoor growers or those who want to smoke a less stinky strain. This indica-dominant weed strain is a cross of California Kush, Northern Lights, and Lowryder. With an average of 15% THC, this low odor marijuana strain is ideal for patients with inflammation, chronic pain, stress, and nausea.

8. Sharksbreath: Don’t let the name of this cannabis strain fool you. Sharksbreath is actually a low-odor weed strain with a sweet aroma that is not overpowering. This indica-dominant strain is a hybrid of Great White Shark and Lamb’s Bread. A low odor strain for indoor growing, many growers like that they can grow Sharksbreath discreetly, and the flowering period takes nine weeks. Sharksbreath is known for its short flower yet plentiful buds with thick pistils covering the plant. With its THC content of 17%, this low-odor marijuana strain helps alleviate stress, depression, and pain symptoms.

9. White Rhino: This low odor indica-dominant hybrid strain has a subtle earthy and sweet smell. The flavors produced by White Rhino are deliciously sweet with fruity notes but not overpowering. While the plant is growing, the White Rhino could almost be considered an odorless weed strain. With a THC content of 19%, White Rhino gives stoners a supremely relaxing and soothing high that helps them relieve chronic pain and stress. The White Rhino plant flowers in nine weeks and is covered with white trichomes and many buds.

Of course, while some favor these low odor weed strains, every stoner enjoys smoking a super loud marijuana strain with a pungent aroma everyone once in a while. If you require a toke session but still want to be discreet, we’ve detailed a list of 27 Ways to Mask that Weed Smell When You Smoke Marijuana.

What are your favorite low odor strains? Hit me up on social media and tell me which of these least stinky strains you prefer when trying to be stealthy about smoking pot. Tell me if you have a favorite low odor weed strain that didn’t make our list.