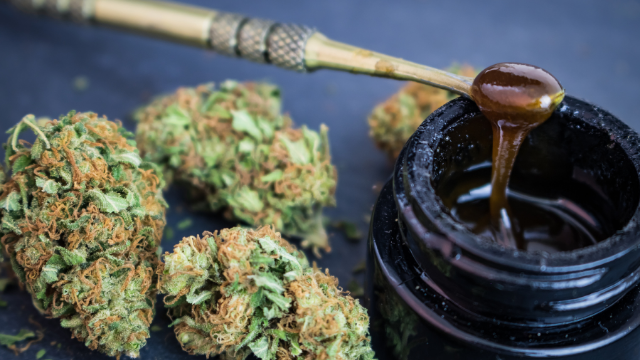 The term “dabbing” will have different meanings depending on the context, but when it comes to marijuana speak, dabbing is the act of consuming a cannabinoid concentrate (often THC). Not entirely different from smoking marijuana from a bong, dabbing involves heating up cannabis extract (called dabs) in a bong-like rig.

For first-time tokers, you may want to hold back on the dabbing until you’re more comfortable with more traditional marijuana products. Dabbing tends to provide a significant high that many newbie stoners may be unfamiliar with.

But if you’re interested in expanding your smoking portfolio (smokefolio?), here are a few notes before you light up.

What you need to dab

Dabbing is centered around the use of a highly concentrated cannabis extract, which comes as an oily or waxy substance. Compared to weed, dabs can be extremely potent, usually having 4-5 times the THC concentration than their plant counterparts.

Instead of rolling paper, to smoke concentrates you’ll need a dabbing rig, which is reminiscent of a bong. The rig is shaped differently than a bong, but utilizes a similar technique of heating up the glass, adding your preferred product, and breathing in from another tube.

Alternatively, many stoners also use electronic dabbing pens to get the same result with the hassle of heating up the rig on their own.

The most obvious difference between smoking weed and dabbing is the increased potency of dabs. As we’ve previously mentioned, with much higher THC concentrations, dabs will allow the user to reach a significant high more quickly than you would by smoking most flowers.

Another advantage of dabbing is that, in some ways, dabbing is healthier for your body. Smoking marijuana can put some strain on your lungs, while dabbing doesn't actually produce any smoke. Instead, dabbing vaporizes the concentrate, which leaves less residue in your lungs.

Something else worth noting is that dabbing tends to accentuate more flavors than traditional marijuana. The process of producing dab extract retains terpenes, which give marijuana products their unique flavors.

While dabs are safe for people that know what they’re doing, it’s worth noting that there are a few risks for first-timers. Due to the general potency of dabs, they are not recommended for individuals that aren’t already familiar with smoking weed or consuming THC in other manners. In extreme cases, the significant high achieved from dabbing can result in anxiety attacks or increases in heart rate.

Additionally, while some forms of weed motivate and help individuals become more productive, dabs tend to be more of a “time to relax” kind of high. Dab at your own risk if you have other plans that day.

Something else to consider before dabbing is that the process of getting high is much faster than smoking. This can be seen as a benefit, but to many stoners, getting high is an experience to be shared around friends, and is not explicitly about reaching the final euphoric state. If you prefer to joke, laugh, and mess around with your pals while getting high, there’s nothing wrong with sticking to joints or bowls!

Overall, dabbing is quite similar to smoking, but with a little more kick. So next time you hear the term “dabbing,” the conversation may not be about the dance move!