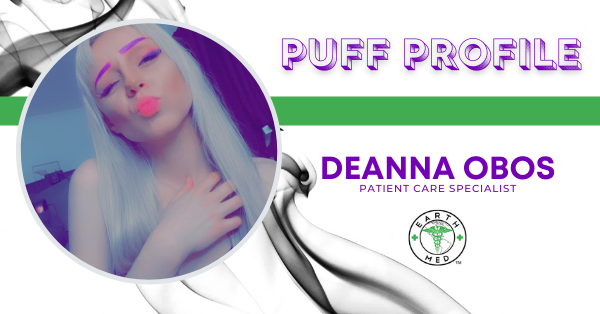 Hopefully, you have been keeping up on our monthly Puff Profiles featuring our Patient Care Specialists. Last month we featured Rob Ungaro, who works at Earthmed’s Rosemont marijuana dispensary. For November, we are featuring Rob’s coworker and fellow budtender Deanna Obos -- coincidentally for her birthday month!

Deanna and I spoke during the afternoon, a time that worked well for her since she struggles with fibromyalgia and other chronic autoimmune diseases. Previously in the bar and restaurant industry, Deanna has been at EarthMed Rosemont for two years. She enjoys her coworkers and describes her relationship with cannabis as “functionally wonderful.” Using medical marijuana helps Deanna deal with the symptoms of her illnesses. Sativas sharpen her focus and get rid of the morning brain fog and inability to think straight, while edibles and patches assist in alleviating her nerve pain.

One of Deanna’s favorite patient care stories is about a woman suffering from fibromyalgia for eight years. On the patient’s first visit to EarthMed, Deanna spent over an hour with her and was able to help get her started using cannabis to help keep the fibro monster at bay. Deanna told me that it’s rewarding for her to see regular customers getting better and stronger as they learn which strains and products work best for their symptoms. Using her experience to help others is one of the reasons why she loves working in the medical marijuana industry.

I asked Deanna how she prefers to consume her medical marijuana, and she told me that her favorite is dabbing concentrates. She likes a traditional dab rig but finds it cumbersome and prefers to use the seahorse (an electric nectar collector) for her concentrates. After speaking with Deanna, I had to get a seahorse of my own (the tie-dye one, of course), and I agree -- the process of smoking concentrates with the seahorse is much easier than the traditional, multi-step dab rig.

When Deanna is not helping customers at EarthMed, she loves to play video games and go on adventures with her boyfriend -- including ghost hunting. Using the Spirit Box app on her phone, Deanna has visited local spooky places like Joliet haunted prison. She was allowed access via her brother, who was part of the crew setting up the haunted house for Halloween. While exploring the dungeon with the Spirit Box, she got told to leave four times. She continued exploring even though her brother ran out. It takes a LOT to spook this little lady!

Sativa: Galactic Jack (Shelby County), Outer Space (Cresco), Chernobyl, Durban Poison, 3D, anything that has Space Queen as the parent strain is one of her favorites.

Stop by the EarthMed Rosemont location to meet our Patient Care Specialist Deanna Obos; you can talk about ganja, gaming, and ghosts! In the meantime, you can follow Deanna on all the social media here.