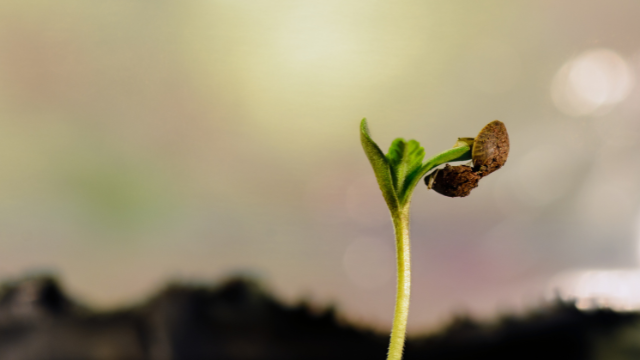 As a cannabis connoisseur, it’s important to know the marijuana plant stages and the length of time it takes for the plant to grow. On average, a healthy cannabis plant can take anywhere from three to eight months to complete the marijuana growth cycle.

It’s key to remember that cannabis cultivators must tend to the plants often, ensuring every need is met, including proper airflow, amount of water, nutrients, light, humidity, and temperature. A marijuana plant is no different than any other plant requiring photosynthesis to occur in order to grow. Each of the four stages of cannabis growth has its own requirements to ensure a healthy weed plant. These stages of weed growth are only part of the life cycle of a marijuana plant.

We recently wrote about the parts of the marijuana plant in our post, Cannabis Plant Anatomy 101: From Bracts to Xylem, and now we’re going to dive deeper into the four cannabis growth stages and what they are.

1. Germination Stage: The first of the four stages of growing weed is the germination stage, which lasts anywhere from 24 hours to two weeks. The grower begins the process of cultivating marijuana by taking a mature seed, which appears to be light to dark brown and feels dry and hard, as opposed to an undeveloped cannabis seed, which is usually white or green and soft.

The mature seed needs to be placed in a wet and dark environment. Some growers will place the seed in a wet paper towel, a cup of water, or a cabinet. Then, the seed needs light to germinate. When the seed begins to sprout, the cultivator will plant the seed in nutrient-rich soil.

In the germination stage, the taproot will begin to grow, and two round cotyledon leaves flourish from the stem as the protective outer shell of the seed starts to open up to allow the plant to grow. As the roots and leaves begin to develop, the first stage of marijuana growth ends and transitions into the seedling stage.

2. Seedling Stage: The second of the four stages of weed growth, the seedling stage, typically takes two to three weeks. Though, in some cases, it could be longer. As mentioned above, during the cannabis seedling stage, the plant’s root system develops as the traditional fan leaves grow. To have a healthy marijuana plant, the seedling will need to be placed in a clean environment with little to no moisture, as this can cause the seedling to become diseased or moldy. Growers know that the seedling is healthy by its appearance - short and bright green.

Seedlings thrive in temperatures between 68 degrees Fahrenheit and 77 degrees Fahrenheit, with a humidity of 50% to 70%. Cultivators are sure to use nitrogen-based fertilizer and moist soil to plant the seedlings. Then, a small amount of water is required as the seedling has a small root system at this point that doesn’t require much water intake.

Lastly, this marijuana seedling stage requires a lot of light - anywhere from 16 to 24 hours. The plant is considered a seedling until leaves with the full amount of fingers grow. Typically, cannabis plants have anywhere from five to seven fan leaves, but they can have up to 13.

3. Vegetative Stage: As the third stage of cannabis growth, the vegetative phase usually takes two to eight weeks, but it can last as long as 16 weeks. In the vegetative stage, weed plants grow at a fast rate with additional nutrients and carbon dioxide. The appearance of the marijuana plant changes, and the stem becomes thicker. There will be more nodes, branches, and leaves that have sprouted with a larger root system.

The plant grows vertically and begins to take on the shape of the marijuana plant. To grow in the vegetative stage, cannabis plants require both nitrogen and potassium, an abundance of light - 16 to 24 hours - humidity level of 50% to 70%, the temperature of 68 degrees Fahrenheit to 77 degrees Fahrenheit, and well-drained soil.

Growers can identify if the marijuana strain is a sativa or indica, whether it’s tall and thin or dense with leaves and shorter, respectively. In the cannabis vegetative stage, the plant’s sex can be determined. If it’s a female, it will have two white pistils, and a male will appear to have sacs of pollen. The male plants will be removed from the yield to avoid contamination before the cannabis plants enter the flowering stage.

As the marijuana plant continues to grow rapidly, more water will be needed. Growers typically start by watering near the plant’s stalk, and as the roots grow, they’ll water away from the stalk, so the roots absorb more water. The growth of marijuana in the vegetative stage is correlated to how fast the plant gathers light and goes through photosynthesis.

4. Flowering Stage: The final stage of the cannabis growth cycle is the flowering stage, which lasts anywhere from six to eleven weeks. The key to entering the cannabis flowering stage is the plant receiving less light. Outdoor plants usually take longer to flower because it depends on the daily cycle of sunlight and darkness. Growers can control indoor growing with less light.

Cultivators notice resin and trichomes developing on the cannabis plant. They look for clusters of trichomes - the more trichomes, the more potent the strain. The amount of potency depends on how long the plant spends in the flowering phase. In the flowering stage, marijuana develops resinous buds, and when the buds mature, the plant is ready to harvest.

Now that the four stages of marijuana growth are complete, it’s time for the growers to harvest their well-tended crop. Harvesting is part of the life cycle of the cannabis plant. It’s important for cultivators to know when to harvest weed. If it’s too soon or too late, the plant could have less potency, taste bitter, and smell bad.

Harvesting usually happens in the fall for outdoor growers, but it can take place any time of the year for indoor growers. The marijuana plants will give growers an indication of when it’s time to harvest. Cultivators pay attention to the color of the pistils and leaves. When the pistils are mostly brown, and when the leaves have turned yellow, it’s harvest time.

At this time, harvesting begins, and marijuana plants are cut into smaller branches to get to the resinous buds. Cultivators will hang the cuttings upside down in a dark, dry, and cool environment for one to two weeks as they dry. This drying process helps prevent mold.

After harvesting the cannabis plant, the next step is pruning. The process of pruning ensures that the buds are rounded, and this will enhance the consumer’s experience when smoking the bud. There are two types of pruning - dry and wet. Most growers prune marijuana when it’s wet, as it’s easier. When the plant is dry, the leaves tend to curl, making pruning difficult.

The weed plant must be completely dried before storing and curing. Every part of the plant has a purpose, but the bud is the prized possession.

Cultivators Prepare for Next Year’s Crop

After the four stages of marijuana growth, harvesting, and pruning, growers will prepare for the next season or yield of cannabis plants. They can either clone one of their plants or start the process over with new marijuana seeds. This completes the life cycle of the cannabis plant.

As the legalization of marijuana in the United States spreads, users have to decide whether they want to grow their own weed or purchase cannabis from a dispensary. Having an idea of the cannabis growth stages helps.

It’s much easier to purchase marijuana from a dispensary since cannabis cultivation requires a lot of extra work, equipment, research, and, ultimately, patience. If you choose to grow weed, check to see what your state and local laws are, as penalties for growing marijuana can be high if illegal or depending on the amount grown.

Whether you want to learn about the stages of a weed plant and appreciate them as a consumer or try your hand at growing, we hope this post on the four cannabis growth stages provides you with an understanding and a deeper appreciation of the marijuana plant life cycle.