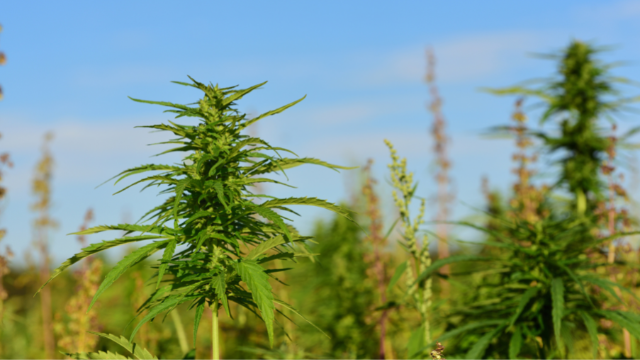 Whether you are a cannabis connoisseur, an occasional recreational weed smoker, a medical marijuana patient, or a novice toker, it’s essential to have an understanding of the anatomy of a cannabis plant. Read this cannabis plant parts 101 blog post as a refresher course or an informative article to learn more about the earth’s natural medicine. Let’s begin dissecting the parts of a marijuana flower to see what makes up the cannabis anatomy as a whole.

The basics of the marijuana plant anatomy:

The weed plant anatomy includes small, pear-shaped leaves, otherwise known as bracts, which form the buds on the marijuana plant. Sometimes, bracts are referred to as the seed pod, as they cover and protect the cannabis seed. You can find bracts between the sugar leaves. They are often green in color but may change colors and appear in different sizes and shapes. Bracts have many resin glands, which lend to them being one of the prime parts of a cannabis plant, specifically where the highest THC concentration is found in the entire marijuana plant.

The branches are parts of the marijuana plant, which grow from the main stem, giving the plant extra support for the fan leaves and flower. The marijuana plant’s branches will grow thicker as the leaves grow and continue to absorb sunlight.

The calyx is found inside the bracts of a female weed plant. As one of the many parts of the cannabis plant, the calyx’s responsibility is to protect the bud during the critical stage of development. The calyx is practically a transparent layer protecting the female plant’s ovule.

The cotyledons are the first leaves appearing on the cannabis seedling after sprouting. Cotyledons are also called seed leaves and typically grow as a pair of tiny green leaves. The weed plant can begin photosynthesis because the cotyledons contain chlorophyll. The energy produced from photosynthesis allows the marijuana plant to grow. The cotyledons will shed, allowing other parts of a cannabis plant to mature and continue to grow and absorb nutrients.

Let’s dive into cannabis leaf anatomy. After the cotyledons have begun to produce energy for the marijuana plant to grow, the first serrated fan leaves will start to bloom a few days later. These fan leaves continue to enlarge while growing the additional apexes or fingers associated with the marijuana plant anatomy. When the fan leaves are growing, they use water, sun, and carbon dioxide to create sugars. A fan leaf typically has five, seven, nine, or more fingers in its prime.

The appearance of the fan leaf can differ depending on the type of cannabis strain. Sativa strains typically have more slender fan leaves with more leaves per plant than indica, with nearly thirteen in some cases. The indica strains differ in appearance by having fuller fan leaves and usually less than sativas, with somewhere between seven and nine. There are also autoflowers, or Ruderalis leaves, which are distinctly shorter than indica or sativa strains and have fewer fingers, usually three to five. The fan leaves are also thinner on the Ruderalis strains.

Fan leaves have lower cannabinoid concentrations, as their primary functions are storing water, absorbing sunlight, and protecting the flower. Many consumers will judge the overall plant health based on the appearance of the fan leaves. For marijuana beginners, it’s important to note that the fan leaves are not the part of a cannabis plant that is smoked.

It’s time to discuss the anatomy of a cannabis flower - arguably one of the most essential parts of a marijuana plant. The flowers, also known as buds, are the prized possession of the weed plant for cannabis consumers. The marijuana flower contains the cannabinoids and terpenes, which give weed the taste and potent aromas associated with certain strains.

When describing the weed bud anatomy, the flowers have a teardrop shape and consist of pistils that attach to the bracts. You’ll notice that the cannabis flower is usually covered in crystal-like trichomes, and the more trichomes the plant has, the more desirable the marijuana flower. The flower is the part of the cannabis plant anatomy that gives users the feeling of being high after consuming. Medical patients seeking relief from symptoms of their debilitating health conditions find many medicinal benefits associated with cannabis flower.

It’s important to remember that the flower only grows from female plants. The buds are dried, and many people grind them before smoking or consuming them. If you make a trip to your local dispensary, you’ll find many strains of cannabis flower already ground up and ready to purchase for easy toking.

In the anatomy of a cannabis plant, the nodes are where the branches protrude from the stem. During the vegetative state, the nodes form parallel to one another, but as the stages progress into the plant flowering, the nodes can start to look irregular. The appearance of the nodes is a trait that helps consumers identify the species.

Indica strains typically tend to have nodes that are closer together, while the sativa cannabis strains’ nodes are farther apart. The nodes have a particular purpose as part of the marijuana plant, as this is where you can start to identify your plant’s sex. The nodes are where you’ll see pollen sacs or buds starting to develop. The nodes connect the new stems, offshoots, or branches with older plant growth and have the ability to form new growth, such as a bud, leaf, or branch.

The phloem is the part of a cannabis plant that is inside the stem and leaves of the weed plant. The job of the phloem is to transfer the sugars, nutrients, and energy throughout the entire plant.

When the seeds have gone through the germination stage for about three to five days, a white root will start to grow from the seed. Once the seed is planted, this root is called the taproot, otherwise known as the main root, where other rootlets sprout, forming almost a pyramid-like structure. The cannabis plant’s taproot usually grows vertically and the offshoots horizontally. These other rootlets are critical to the cannabis plant anatomy as the roots absorb the nutrients and the water that feeds the plant and allows it to grow.

Let’s delve into the cannabis seedling anatomy. The baby marijuana plant, as it starts to develop slowly, is called a seedling. The plant is considered a seedling until fan leaves begin to form. Look for the seedling to be a vibrant green color to monitor the plant’s health early on. If you are growing your own cannabis plant, be sure not to overdo it on the watering, as the weed roots are tiny at this seedling stage.

A cannabis seed is what initiates the growth of the marijuana plant. The female plant produces seeds, but they carry both the genetics of female and male plants. The cannabis seed anatomy includes a hard shell that serves the purpose of protecting the plant’s embryo. When the plant germinates, this is what will become the seedling.

When the fan leaves absorb the light from the sun and new leaf growth appears, the stem will become thicker and stronger. When this happens, more internodes develop around the stem. The structure of cannabis plants is due to the stem, which gives structure to the cannabis plant and provides support to the leaves, flowers, and branches.

The stem is made up of a vascular system, including the phloem and xylem. These two parts of the vascular system helps give the entire marijuana plant the support and structure it needs to grow. Growers will usually cut off the top of the stem, which can allow the plant to continue to grow even more flower.

As part of a marijuana plant’s reproductive system, the stigmas are the white hair-like strands that grow on the plant’s pistils. Stigmas are an essential part of the anatomy of a cannabis plant, as these hairs collect the pollen from the male plants and are responsible for creating cannabis plant seeds.

After the weed plant is mature, the color of the stigmas can change from white to hues of yellow, orange, red, and finally, brown. An important note to highlight is that stigmas don’t influence the potency or taste of weed.

The sugar leaves are parts of a cannabis plant that are similar to regular plant leaves. They are not as large as the fan leaves that grow on the marijuana plant from the cola. You can see the resinous sugar leaves growing between the buds. Sometimes, sugar leaves will have trichomes, depending on the species.

Critical to protecting the plant, the sugar leaves have potent trichomes, which contain cannabinoids, like CBD and THC, as well as terpenes that offer recreational users a lovely high or medical patients benefits to alleviating their symptoms. While sugar leaves are not typically smoked, if they are from quality strains, they can be used to create marijuana products, like extracts, edibles, and oils.

Cannabis consumers are huge fans of trichomes - parts of a marijuana plant described as tiny crystals covering the marijuana buds and the structure of the cannabis plant, including the fan leaves, sugar leaves, and bract. Trichomes form a sticky layer covering the flower.

Marijuana flowers that haven’t been pollinated usually have more trichomes, thus having more potent terpenes and cannabinoids. Besides producing cannabinoids and terpenes, trichomes serve another important function in the structure of the cannabis plant. The stickiness of the trichomes helps protect the marijuana plant from insects and predators as the plant grows. The trichomes even help protect the weed plant from the sun's UV rays.

The anatomy of a cannabis plant wouldn’t be complete without defining the xylem, a tissue in the vascular system of the cannabis plant. As one of the main components of the stem of the marijuana plant, the xylem moves the water and nutrients throughout the plant from the roots.